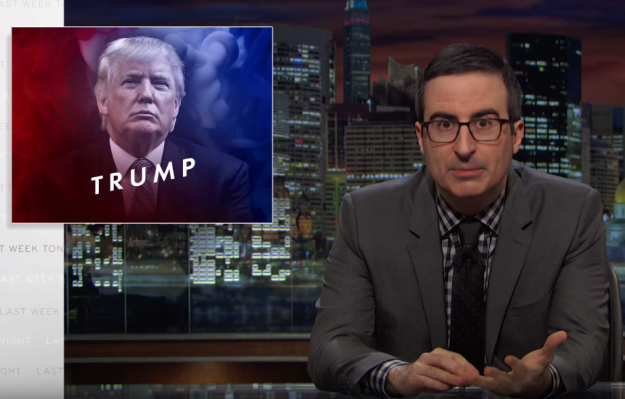 “Donald Trump is America’s back mole—it may have seemed harmless a year ago, but now that it has gotten frighteningly bigger, it is no longer wise to ignore it.”

All of this is amazingly brilliant and accurate. Someone needed to do this and I’m glad it was John Oliver.

And with that, John Oliver finally took on the politics of Donald Trump on Sunday, after spending months largely ignoring the real estate magnate’s meteoric rise in the polls since launching his presidential campaign last summer.

“But he has now won three states, has been endorsed by Chris Christie, and polls show him leading most Super Tuesday states, which is a big deal,” Oliver said.

While he claimed to understand why Trump’s campaign is resonating with voters, Oliver explained that upon closer inspection, Trump’s appeal reveals to be quite horrifying, much like the attractiveness of a “buffet lunch at a strip club.”

“Stop and take a moment to imagine how you would feel if you just met a guy named Donald Drumpf, a litigious serial liar with a string of broken business ventures and the support of a former KKK leader who he can’t decide whether or not to condemn.”