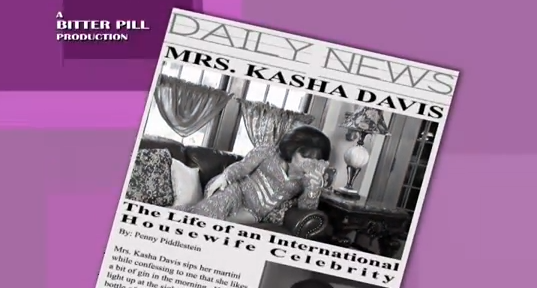 Before RuPaul’s Drag Race, I was a student at St. John Fisher College getting my degree in Communications. My professor offered me an Independent Study of whatever I wanted. I chose to put together a variety sketch comedy show to air on Rochester Public Access Television.  It was called The GAY (means happy) SHOW! I had NO budget, wrote, shot, edited, directed all of it and used my talented friends as actors. One of those friends was Darienne Lake and another was Mrs. Kasha Davis. The show also played (to much success) at the ImageOut Gay & Lesbian Film Festival. After the show because I found Kasha to be hysterical (her skit Kasha’s Balls of Love was mostly all improv!) I wanted to create something that had that Deven Green – Welcome to my Home feel.  So, Mrs. Kasha Davis: The Life of an International Housewife Celebrity was born. This short also played successfully at the ImageOut Gay & Lesbian Film Festival.

I look at it now and (but I’m no George Lucas) would fix a lot of technical things and such.  What I wouldn’t change is the fabulous performances in it. I’m so thankful to have been surrounded by an amazing group of friends in Rochester, NY (two of which followed my onto RuPaul’s Drag Race!). Thank you all for everything! Love to all of you!