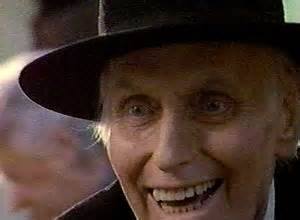 I didn’t want to give the death of Fred Phelps any attention whatsoever.  He certainly got way more attention in life than he ever should have.  He was a wretched horrid man who spewed hate and vile on innocent people.  Him and his “followers” of the Westboro Church, which basically means his family.  After reading what his son Nate Phelps had to say of his father’s passing, I decided I did want to give this some attention because it’s pretty profound.  Proof that even down the darkest path, one can turn around and see the light.

This is  Nate Phelps’ public statement:

Fred Phelps is now the past. The present and the future are for the living. Unfortunately, Fred’s ideas have not died with him, but live on, not just among the members of Westboro Baptist Church, but among the many communities and small minds that refuse to recognize the equality and humanity of our brothers and sisters on this small planet we share. I will mourn his passing, not for the man he was, but for the man he could have been. I deeply mourn the grief and pain felt by my family members denied their right to visit him in his final days. They deserved the right to finally have closure to decades of rejection, and that was stolen from them.

Even more, I mourn the ongoing injustices against the LGBT community, the unfortunate target of his 23 year campaign of hate. His life impacted many outside the walls of the WBC compound, uniting us across all spectrums of orientation and belief as we realized our strength lies in our commonalities, and not our differences. How many times have communities risen up together in a united wall against the harassment of my family? Differences have been set aside for that cause, tremendous and loving joint efforts mobilized within hours… and because of that, I ask this of everyone — let his death mean something. Let every mention of his name and of his church be a constant reminder of the tremendous good we are all capable of doing in our communities.

The lessons of my father were not unique to him, nor will this be the last we hear of his words, which are echoed from pulpits as close as other churches in Topeka, Kansas, where WBC headquarters remain, and as far away as Uganda. Let’s end the support of hateful and divisive teachings describing the LGBT community as “less than”, “sinful”, or “abnormal.” Embrace the LGBT community as our equals, our true brothers and sisters, by promoting equal rights for everyone, without exception. My father was a man of action, and I implore us all to embrace that small portion of his faulty legacy by doing the same.

Well said Nate, well said.  Now let’s just make sure not to say F.P. three times because we don’t want him coming back.